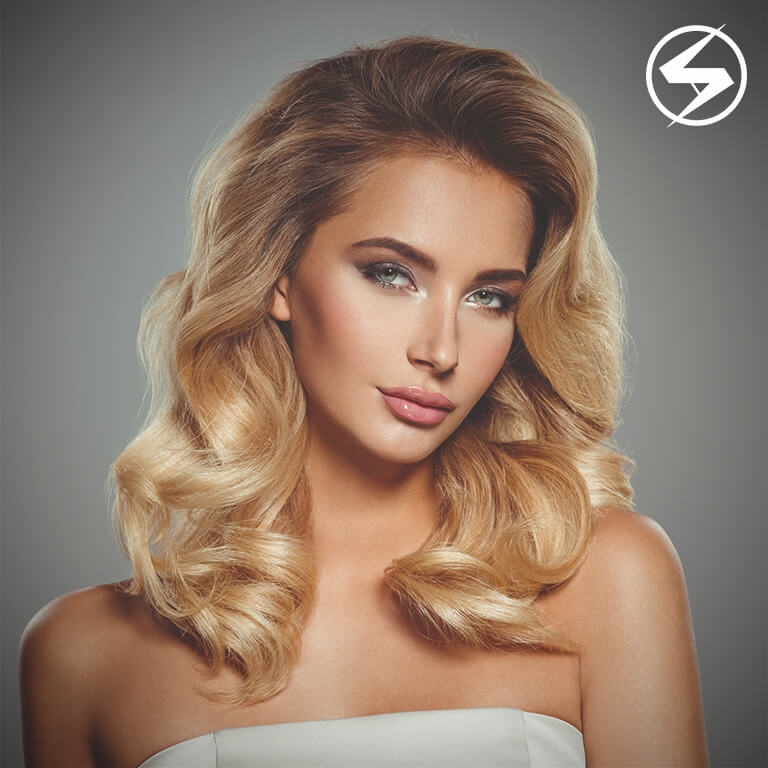 Beat The Fear Of Approaching Women | Overcome Your Anxiety (forever)

In this article, I am going to show you how to beat the fear of approaching women that you find attractive.

In doing so I will go through three powerful stories of times where clients have attended my dating confidence courses and where I have helped them to overcome their fear of speaking to women.

Above all, these stories will give you some wisdom and insight into how you can overcome your own fear of approaching women.

Beat The Fear Of Approaching Women #1 – The Client From Russia

The first story of how to overcome the fear of approaching women relates to a special forces guy who came over from Russia.

I remember my first consultation call with him.

We spoke on the phone and he claimed that he could do anything in his life that he put his mind to.

In other words, fear does not affect him.

That is, apart from approaching women. He relayed to me that he had tried every single way he could think of, but nothing worked.

This was the reason he decided to book one of my courses.

Here is the real key insight.

I pointed out to this client that Genghis Khan was one of the greatest leaders that had ever lived.

And, interestingly, one of the things that Genghis Khan did when he attacked Russia was that he didn’t wait for the optimum time and season to attack.

Instead, what he decided to do was wait for the worst possible time. Namely, Russia in the height of winter, when it is so cold that no one would have expected an imminent attack.

Crucially that is one aspect of what made him a great leader.

Approach women when you are most scared

The reason why I told that story to my client was that he was one of these guys that thrive in difficult times.

That is where he lives and is most comfortable.

What was happening is that he was waiting for the easy opportunities to approach women. Yet, this really didn’t suit his personality.

His personality was more: Give it to me as hard as you can and I will find a way to make it through.

Therefore on my course, I took my client to some of the most difficult situations you can find yourself approaching women:

Specifically, places where there is a lot going on, resulting in him stepping up and overcoming his fear.

And the end result was that this guy thrived.

He didn’t just overcome his fear of approaching women; he completely got rid of it

So what we found here is that if you are someone that thrives in difficult times; it brings you vital energy and makes you feel alive.

Certainly, this is true in every area of our life.

Most of us, most of the time, wait for the easy option and the easy time. But isn’t there something energising about saying:

Moreover, having that mindset empowers you in every single area of your life; not solely in overcoming your fear of approaching women.

There are many different ways to approach women, which is why I have designed the following infographic to act as a helpful guide.

I recommend reading my how to approach women article where I detail each approach and how to implement it. 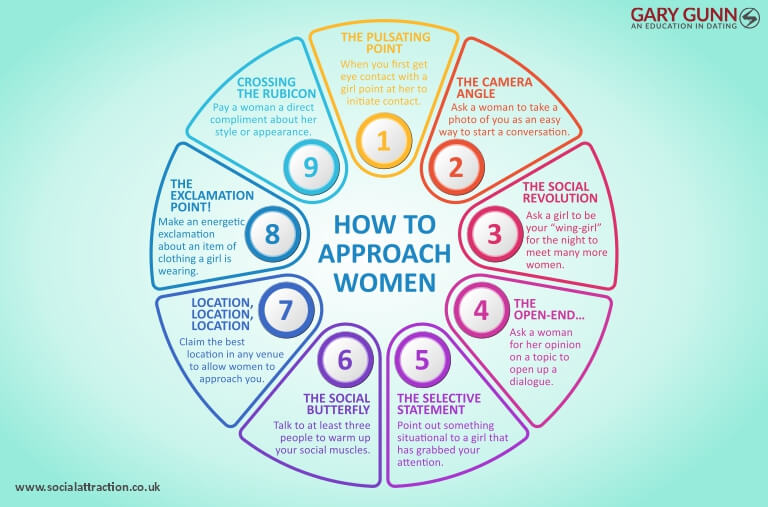 Beat The Fear Of Approaching Women #2 – The Over Competitive Client

The second story of how to overcome the fear of approaching women concerns a client of mine who, when he first spoke to me on the phone, sounded like an ideal client.

He was around mid-thirties, very articulate. He was really excited about overcoming his fear and I was excited about coaching him.

When he turned up on my course, he was alongside another client of mine. We started talking and I relayed what we were going to be doing on the course.

And this client said:

“Oh, I’m really competitive, I’m ultra-competitive. So, make it into a game and I’ll make sure I win.”

I thought: Okay, we’ll give this a go.

Interestingly, what happened was the other client went out and initially did better.

He got three girls’ numbers on the course, whereas this guy didn’t.

What was happening was that he was putting too much pressure on himself because of the competition.

And halfway through the day, I had to say to him:

This had the effect of taking the pressure off him. So the very next girl that he went up to, he was able to go on an instant date with her.

Too much competition increases your fear of approaching women

The simple reason for this is competition can be good for you, but too much of it cripples you:

One of the simplest things you can do to overcome your fear of approaching women is to stop competing.

That really helped this particular client with his fear of approaching women.  In addition to this, I taught him some of the simple processes that I teach in my course to reduce his anxiety.

To find out more about the techniques and skills that I teach in my courses, take a look at the comprehensive infographic below.

For further information, you can also view our live training page. 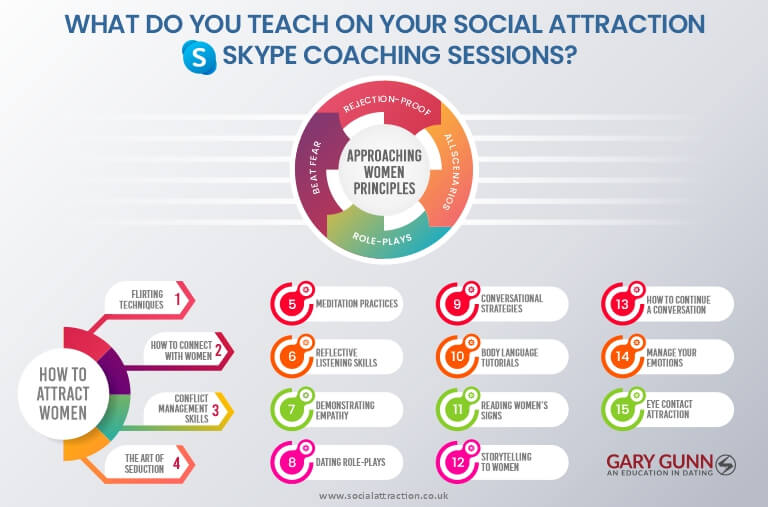 I distinctly remember the consultation call with this client. He said to me:

“I’ve had anxiety of speaking to women for 20 years. There is no way that you can help me to overcome my anxiety.”

And I replied: “Okay, well this is what would happen if you came to one of my courses. I’m an experienced coach.”

To put him at ease I also confirmed that we have a money-back guarantee:

“Okay, come to the course. If you don’t overcome your fear of approaching women, then I will guarantee your money back.”

Bearing in mind this guy struggled for 20 years, I fully understood his trepidation and worry about finally facing his fear.

Making a decision to change can eradicate fear

Here is what is interesting.

With a lot of us, it is not actually the process of being on my course that helps you overcome the fear of approaching women.

It is deciding to make a decision to change your life.

With this guy, when he decided to commit to coming to my dating confidence course, he changed.

He was no longer someone that was waiting for things to happen. Instead, he made a decision:

I’m going to rid myself of this fear once and for all.

By making that decision to come to my course, he had already overcome his fear

When he finally did attend the course a few weeks later, for me, it was relatively easy to help him overcome his fear.

These included a few simple techniques, such as:

Within an hour, this guy was approaching women that he never would have had the confidence to approach ever.

Importantly, I can’t take full credit for him beating his fear of approaching women because, as I say, the credit of that was in his decision to change his life.

The next step after beating the fear of approaching women is learning how to flirt.

I have created the following infographic for you that gives some fun ways to flirt with women.

You can also read my full how to flirt with women feature. 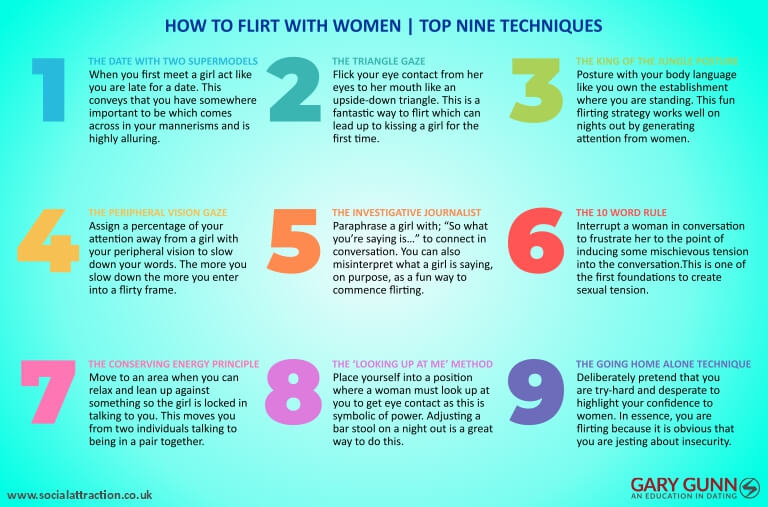