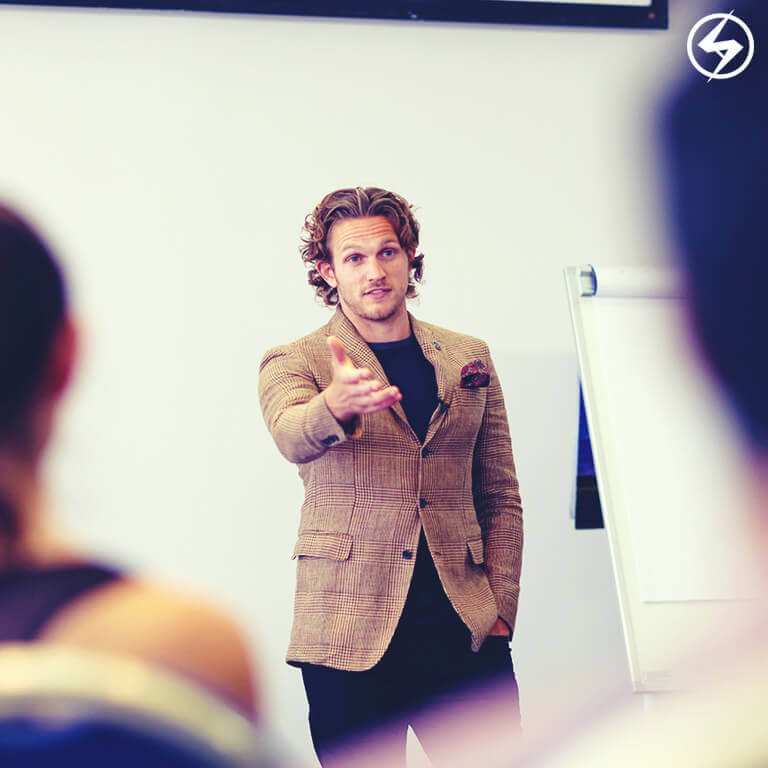 Okay. Welcome back to today’s episode where I’m going to be discussing Julius Caesar, who is still a household name, 2,000 years after his death. So, as you can imagine, there’s probably something quite interesting about this guy, as to why we know so much about him.

Now, Julius Caesar lived in probably one of the worst times in history for war. And, he came up as an amazing leader and led a revolution against Rome. So, he was a fantastic leader at that point in history. And, there are two stories about Julius Caesar, which I’d like to share in today’s episode, which I find, you know, fantastic. Now, the first one, when Julius Caesar was about 25 years old, this is before he became a great leader and a great general.

He was captured by pirates. And, when he was caught, they basically put him out to ransom, and they said, “Right, we want 10 gold coins for you.” And, he laughed at them. And bearing in mind, he’s, you know, in the face of pirates who are deadly, they are brutal, and they are ruthless. And he said, “Tell them you want 20 gold coins, I’m worth more.”

Now, as you can imagine, what Julius Caesar’s really doing here is putting a value on himself in the worst possible scenario.

He knew he was worth more, and he wasn’t afraid to say it. And what happened next was truly amazing. So, the pirates did. They ransomed him out at double the amount. And, they then instantly respected him. And, in the two weeks during his capture, he was actually playing games with them, he worked with them, he trained with them, ate with them, basically, they took him on as one of their own. And the reason is that he put a value on himself.

When I hear this story, I just think to myself, “My god, you know, how many of us really struggled to put a value on ourselves in life, and specifically with women?” And a great example of this is if we’ve got a date organised for a Thursday night, and we get a text an hour before, “Sorry, hun, can’t make tonight, let’s do another night.” And typically, most of us are going to respond saying, “Yes, no problem, let’s do it.” And really it’s in that specific scenario when we really need to be putting a value on ourselves.

And the one really effective way of doing this, I could tell you loads of different ways, but I think the easiest way of putting a value on yourself is every single situation that arises, and you’re not happy with the way that you’ve reacted, say to yourself, “Okay, if this happens again, what will I do differently next time?” And, when you are clear thinking, and rational, and you make the decision that that’s what you do when a similar situation comes up again, you go with what you’re rationally thinking.

Because at the moment, it’s very easy to get emotional about the situation. So you basically want to learn to put a value on yourself, one step at a time.

And over a prolonged period of time, you will then become more confident, and better at putting a value on yourself. Linking it back to the pirates, they don’t know how much Julius Caesar’s worth. They call him, and they’re like, “Right, well, we’ll put him out for ten.” Until he says, “No, I’m worth twenty,” they didn’t know that. And that is a great powerful story to learn how to put a value on yourself.

Now the second story is also a wonderful story. So, basically Caesar was sailing out with his, with his legion, and I think it was England, but don’t quote me on this. When he first arrived there, they were outnumbered maybe three or four to one. And, what most people would do is they’d get back in their boats, and they’d sail away. But Julius Caesar didn’t do that. He gave the order to burn all of their ships. And, they burned their ships, and he turned, and he said to his legion, “Right, now we either fight, or we die.” And, they fought, and they won.

I  first read this in Think and Grow Rich, but I didn’t know it was Julius Caesar. And Think and Grow Rich is a book by Napoleon Hill, which is amazing, and I’m definitely going to do an episode about that. But let’s just analyse what happened here.

He burned all of his ships and said, “We either fight now, or we die.” What he was really doing was getting rid of all plan Bs. He was saying, “That’s our plan. We either do it, or we die.”

And this is so relevant to every single area of our lives. It is amazing. in the West, we’re taught to have a plan B and have a plan C, and in my experience, I’ve just found that to be absolute nonsense. In my own life, when I first read that story in Think and Grow Rich 12 years ago, that one piece of wisdom gave me the confidence to actually sell the shares in the business that I owned at that time and to set up Social Attraction.

Because what I was trying to do, I was trying to grow Social Attraction at the same time as another business. And I had split loyalties. I was doing too many things, and I didn’t have my own plan A, so I sold my shares, had no plan B, went fully in with Social Attraction at that time. Now, I’m not going to say that the road from there to here’s been easy because it hasn’t. It’s been difficult, it’s been challenging. When I first started coaching, I had zero experience in coaching. But that one piece of guiding wisdom to just have no plan B has led me to not quit, and it’s led me to just carry on, no matter what happens. And I just think it’s such an amazing lesson that we can all put into our lives.

So the two things really to take away from this episode are firstly to put a value on yourself, because if you don’t put a value on yourself, no-one’s going to. And, the second thing, and, this is extremely personal to me, is to have no plan B. If you want to do something, then just do it. Burn all of your ships. And I’ll see you tomorrow, for our next episode.